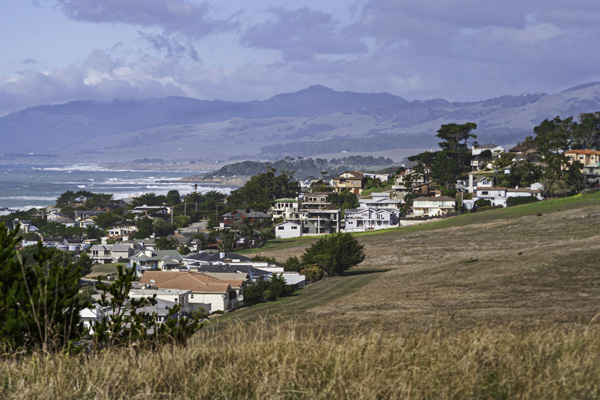 Traces of Cambria's past are everywhere...from rock mortar grinding holes left by the first people, to the historic buildings still in use as restaurants and shops... the past has an immediacy here that lends a feeling of continuity to this special little town.

The first inhabitants of the area of California's central coast now called Cambria were a gentle native people who lived and prospered here for thousands of years. Following a seasonal migration from inland riparian areas to the coastal zone, these people traveled light, and thus have left few artifacts. They excelled at basketry and net-weaving and conducted trade with their relatives inland in the Salinas Valley area. In their canoes sealed with pismo, or beach tar, they also roamed far to the north and south.

When the Spanish arrived with the Portola expedition of 1769, the coastal trail from Morro Bay to San Simeon and northward was already well established, with numerous spurs inland following the creek canyons. The Spanish found large Indian camps near Villa Creek and were greeted warmly and generously. They were not the first outsiders to arrive. Chinese ships had shipwrecked here, the Russians had visited the coast in search of otters to take, and even Sir Frances Drake had moored nearby to make repairs to his vessel. A pretty cosmopolitan list for such a wild and remote coastline!

With the founding of three nearby missions by the Spanish padres from 1771-1779, the peaceable era of native habitation was drawing to a rapid close. Many natives were lost to diptheria and measles; many more escaped inland to the interior valleys, blending their culture with that of the Salinan people. By the year 1800, for the most part, only the outsiders remained.

The secularization of the missions in 1838 turned vast tracts of land over to private Spanish hands and the era of the dons began. From Rancho de la Piedras Blancas in the north, to Rancho San Simeon and Rancho Santa Rosa near present-day Cambria, the majority of the coastal lands were held by the wealthy ostentatious dons. None of the owners actually occupied their coastal holdings, however. Their home territories were on the inland side of the Santa Lucia mountains, where they ran massive horse and cattle operations, using their distant ranchos for supplemental cattle range, and to maintain their secret beach landings for the illegal hide trade with coastal smugglers.

After a brief period of Mexican rule, California became a state in 1851. Shortly afterward, the first American settlers arrived in the Cambria area. A certain wily young man named Domingo Pujol bought the entire Santa Rosa Rancho for $12,000 from its debt-laden owner, and began subdividing and selling off parcels to settlers.

Much of the area was homesteaded by squatters, who eventually gained legal ownership of their property via the preemption laws or the Homesteader's Act of 1862.

In 1869 the controversy over the name of this little outpost was finally settled at a town meeting. Sometimes called Slabtown because of the rough-finished lumber on some hurriedly constructed buildings, the little town was stuck with an identity crisis that had to be solved. Unhappy with the post office-chosen name of San Simeon, and unable to use Santa Rosa or Rosaville (after the creek) because the names were in use elsewhere in California, the weary citizens impulsively took a suggestion from someone who'd just returned from a small mining town in Pennsylvania that reminded him of his California village. The name they chose that night was Cambria. Or so the story goes...

Cambria had many attractions for ambitious settlers willing to work hard. Dairies, ranching, coal and cinnabar mining, and the lumber trade all offered rich opportunities for those hardy first families. Initially, though connected to towns to the north and south only by a frequently impassable wagon trail, Cambria was better supplied than many remote areas by virtue of a regularly scheduled coastal steamer route that picked up and delivered cargo.

The lack of a safe, deep-water harbor caused endless difficulties, however. Cargo had to be floated ashore at one of only two sandy beaches in the area, and bundles of hides often had to be dropped a hundred feet from the top of the cliff to the sand below and then towed out by rowboats to the ships waiting offshore. Passengers boarding the steamer waded out into the surf where they were picked up by small boats.

Numerous attempts to build deep-water piers at San Simeon point whaling station and Leffingwell Landing all met with ultimate failure, as the strong ocean swells and dangerous storms continually destroyed the structures. It wasn't until George Hearst built a substantial pier at San Simeon Bay in 1878 (north of the present fishing pier) that a reliable port served the area. His fees and tarrifs were so high, however, that many people continued to use the old primitive methods of landing cargo on the beaches!

The civil war combined with a severe regional drought to bring hard financial times to the central coast, and George Hearst took advantage of the general misery by buying up land whenever he could. By the 1870's he owned over three thousand acres and had built a large horse farm where he raised fine race horses, just below the current site of Hearst Castle.

When the drought ended, recovery was quick, and by 1875 Cambria was the second largest town in San Luis Obispo county, second only to San Luis Obispo itself. All the residents in the outlying areas relied on Cambria for services and supplies, and the town had a well-developed business center, with four large general mercantile stores, two drug stores, two hotels, several saloons, a carpenter shop, butcher shop and Wells Fargo and Western Union offices, serving about two-thousand total area inhabitants.

The town was not without its wild and wooly aspect, however. With its mud streets and wooden boardwalks, in many respects it was a classic Wild West outpost, with shootings, drunken miners and mysterious disappearances spicing up the daily round. But at its core, the community was composed of people with a strong vested interest in its continued prosperity.

The terrible fire of October 1889 was a significant set-back. It completely destroyed the downtown area, composed entirely of wood-framed buildings. When the townspeople rebuilt, they chose brick structures if they could afford to. The invention of the automobile was embraced wholeheartedly in Cambria, and finally spelled the end of Cambria's role as a coastal shipping center.

Dairy and mining dominated the area for decades. A close-knit community of hard-working families formed the backbone of the Cambria identity. Elaborate community picnics and deep-pit barbeques were famous throughout the county for their rowdy horse racing, music, and baseball games with the local team, the Cambria Kelp Eaters.

An oiled and improved road into town in 1924 eventually attracted land developers who formed the Cambria Development company in 1927. They built a mountain lodge in the woods overlooking the village and subdivided a large wooded tract of land into small lots in what is now called Lodge Hill. The depression slowed growth for a time, but around 1950 the expanding population of California, looking for isolated recreational areas, rediscovered Cambria.

It was mostly a seasonal village, active for a few months each year, until 1958, when the state opened Hearst Castle to public tours, bringing large numbers of visitors to Cambria year-round.

The Cambria Historical Society conducts history walks periodically for those interested in identifying historic structures and learning more about Cambria's colorful past.